For over ten years, the Aleph series of single-ended Class A amplifi ers have received praise for their outstanding sonic defi nition, warmth, and smoothness; and have often been compared favorably with the very best tube amplifi ers. The Aleph topology achieves state-of-the-art performance with a very simple linear design, and is additionally one of the most stable and reliable audio amplifi ers in existence.

A considerable number of audiophiles have found themselves bi-amping their loudspeakers, putting Pass X amplifi ers on the bottom for power and control, conjoined with Alephs on the top for that smooth warm midrange and top end. We well appreciate these complementary differences, and for the past few years Pass Labs has been at work marrying these two design concepts into a single amplifi er topology. The trick was to create an amplifi er which carries the best of both designs, and not otherwise.

The Super-Symmetric X amplifi er uses a new radical approach to achieving high performance from a simple 2-stage circuit. The design exploits the symmetry of a matched balanced amplifi er so that distortion and noise are cancelled at the output to the loudspeaker, then uses a small dose of a unique new form of feedback to make that symmetry more perfect.

US Patent # 5,376,899 describes our topology, which takes advantage of the character of specially matched balanced amplifi ers that are cross-coupled to provide cancellation of distortion and noise. The result provides high performance with very simple linear circuits, better than previous similar efforts by an order of magnitude. It was named Super-Symmetry as an homage to

simple but effective current modulation. If you have followed developments in audio for the last 10 years, you know this design as the Pass Labs Aleph. The Aleph is an incredibly successful ground breaking amplifi er design, hailed in Stereophile magazine as “The Amplifi er of the Decade” and winner of virtually every international design award for audio.

The key virtue of the Aleph design lies in its simplicity and effectiveness. With only two stages and no adjustments it delivers measured performance rivaling the most complex designs, but retains the sonic elegance and nuance of a truly minimalist gain path – only two gain devices in series from input to output.

The two design concepts are not mutually exclusive, and we approached the development of the XA series with an eye to creating a warm/sweet X amplifi er, or conversely, a powerfully dynamic Aleph. The successful result is a circuit which is described as balanced single-ended Class A, consisting of two balanced Aleph amplifi ers sharing a single differential input pair of transistors.

The amplifi er has only the two stages, an input stage of a balanced pair of input Mosfets, and the output stage, a balanced pair of single-ended Class A power Mosfets. Like the Aleph, you can trace a path from input to output through only two gain devices. Like the X amps, feedback is used only to set the gain and correct for dissimilarities between the two matched output stages.

There are no adjustments. There are no frequency compensation capacitors. The amplifi ers are unconditionally stable and reliable into any load. They are not fragile or temperamental. 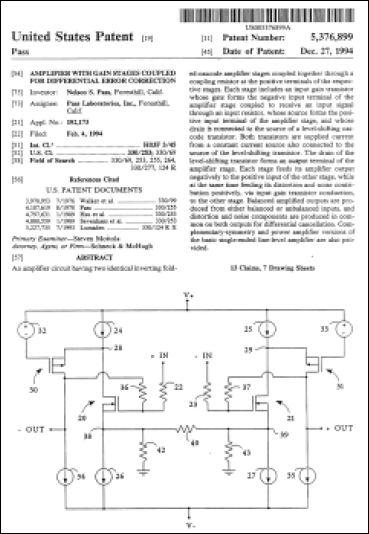 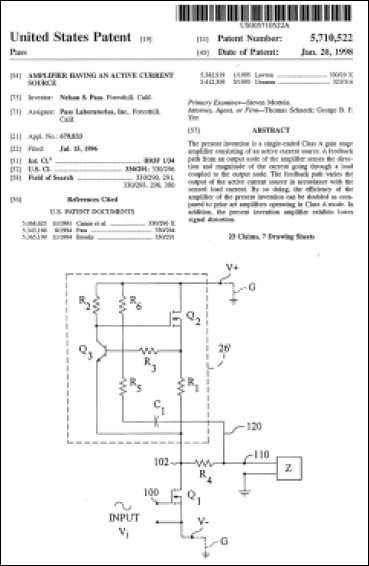 Sometimes two designs complement each other so well that you are surprised they weren’t invented together. So it is with the X Super- Symmetric amplifi er and the Aleph single-ended Class A output circuit.

The Super-Symmetric “X” amplifi er repeatedly demonstrates the possibilities for very high power, dramatic dynamic contrast, and effortless control by a simple circuit utilizing absolutely minimal feedback. As with the art of Aikido, the X circuit works with the intrinsic character of a balanced circuit and deftly turns that character toward perfection. This has been the basis for a very successful Pass Labs product series, which has won numerous prestigious awards and garnered critical acclaim worldwide.

particle physics, but it is popularly known as the X circuit.

Balanced amplifi ers improve performance by differentially rejecting distortion and noise. To the extent that distortion and noise are identical, they vanish at the output, typically by a factor of 10 or so for matched single-ended Class A circuits.

Super-Symmetry extends this concept by using feedback only to make the distortion and noise more identical on each half of a balanced circuit, not to eliminate it as such. This gives as much as a 100:1 reduction in unwanted distortion and noise without requiring the equivalent amount of negative feedback. It is simply much easier to tweak the two halves of the circuit into identical symmetry than to eliminate all the distortion in each half of the circuit.

The result has been a successful series of high power amplifi ers offering low distortion, and stunning dynamic range and control, with only two gain stages and very minimal feedback.

Single-ended Class A has long been known as the “King of the Class A’s”, the simplest, most pure and least effi cient form of audio amplifi cation. Before the Aleph amplifi ers, it was reserved for preamplifi er circuits, high quality amplifi er front-ends, and other very low power output stages.

US Patent # 5,710,522 describes the singleended Class A power amplifi er biased by a constant DC current source which negatively “ghosts” the speaker load with

33% effi ciency, that is to say they idle at three times their rated output. The XA200 is rated at 200 watts output into 8 ohms and draws 600 watts of AC power. This design is an exercise in highly conservative engineering, which provides exceptional reliability and product longevity. The 32 power Mosfet output devices are each rated at 125 watts and yet we operate them at a maximum dissipation of 18 watts. Each of these output devices operates at approximately 2 amps, well below the manufacturers rating of 14 amps; while exposed to no more than 70 volts instead of the 250 volts they are designed to endure.

These rugged TO-3 packaged power devices are matched to about .3% and mounted on Mica insulators. Their massive heat sinks run at about 25 degrees C. above ambient temperature, so that actual chip temperatures are about 70 degrees below their rating. The output devices are designed to last a very long time under these conditions, with a probable life of about 50,000 hours.

The power supply of the XA 200 uses elaborate RF fi ltering and noise suppression designed to block AC noise and line DC. The substantial toroidal power transformer is followed by high speed soft recovery rectifi ers, and 200,000 uF of computer grade capacitors in a CRC passive fi lter arrangement. In addition to a main power switch the amplifi er has a standby mode, which shuts down the bias to the circuit while keeping the supply active, signifi cantly extending the life of the fi lter capacitors.

The sound of the XA amplifi ers is a quantum leap over the parent’s. They retain the sweet warmth and lushness of the Aleph series without the fl uffy colorations. The dynamic contrast is even better than the X series; transients leaping from black and back again with no telegraphing or hangover.

The bass has as much control over the speaker as the original X amps, but is a bit more neutral and carries more subtle nuance. The midrange is a little deeper and the soundstage wider than the Alephs.

Are the XA’s better than Alephs and X’s in every respect?

Yes, except for the higher power/current ratings of the X amps.

Are they the best audio amplifi ers that money can buy?