For several years Pass Labs has specifi ed the nominal wattages at which our amplifi ers leave push-pull Class A operation into an eight ohm load.

Here is a current summary of this information:

We get a lot of questions about this. A typical email reads, “I can’t sleep at night – I keep worrying about where my amplifi er stops being Class A. As I listen to my system, I think I can hear the Klunk as the special Class A part of the amplififi er kicks in and out!”

For starters, there is no special Class A circuit that kicks in and out, and for that matter, there certainly is no Klunk. There is just a push-pull amplifi er output stage which is operated at a constant idle current known as the bias. In this regard, our power amplifi ers are like other amplifi ers on the market. The vast majority of amplifi ers are push-pull designs with a certain amount of bias current.

Push-pull amplifi ers generally operate in Class A mode up to a point where the output current is twice the value of the bias current. In the Class A region, both halves of the circuit share the signal simultaneously. Beyond that the signal is handled solely by the push (+) half of the amplifi er or the pull (-) half.

Let’s look at this in more detail. The simplifi ed circuit for such an output stage looks like this: 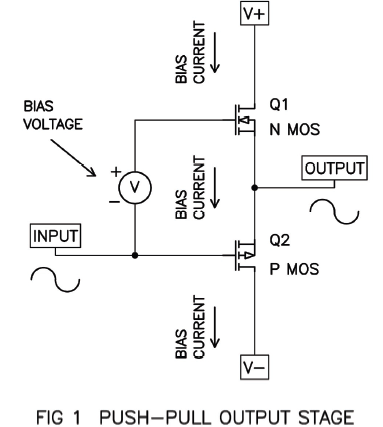 The solution for this is to apply some idle current to the circuit by the mechanism of the bias voltage source you see in Fig 1. This voltage is set so that at idle, current fl ows through Q1 and Q2 equally from the V+ supply to the V- supply and creates a more linear region at the crossover point.

If that is not clear, perhaps an analogy will help: Imagine that the two transistors are runners in a relay race and that the signal is the baton they carry. In a real relay race, the runner receiving the baton begins running before the hand-off, which is made with the runners at speed. The runners who hand over the baton at a dead stop will operate at a severe disadvantage.

So it is with push-pull power transistors. The higher the bias, the smoother, more seamless is the transition.

The quantity of bias current is the key. Figure 2 shows this from the point of view of Q1. 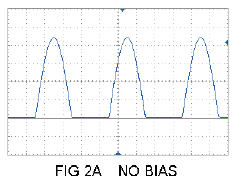 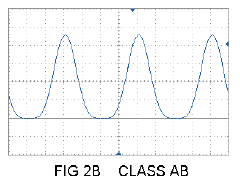 Fig 2a shows Q1 conducting current on the positive half of the signal and experiencing a sharp cutoff as the signal goes negative. 2b shows the effect of a small Class AB bias current – the current shows a gentle cutoff with less distortion. 2c shows enough bias to keep the transistor in the Class A region, where it always conducts current and has even less distortion. 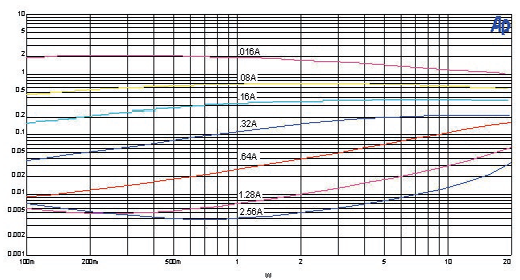 FIG 4A DISTORATION WAVEFORM AND SPECTRUM AT 1 WATT/0.08 AMP BIAS

Figure 4B shows the same test and output circuit, but at a 4 times higher bias fi gure, 0.32 amps. The distortion total has dropped to 0.11%, but of greater interest, the higher harmonics have been dramatically reduced, leaving a dominant 2nd order harmonic.

FIG 4A DISTORATION WAVEFORM AND SPECTRUM AT 1 WATT/0.32 AMP BIAS

At four times more bias in Fig 4C, the continues to drop to 0.004% (remember, this is without negative feedback), leaving nothing to look at on our distortion waveform and only 2nd and 3rd harmonic on the spectrum analysis.

FIG 4A DISTORATION WAVEFORM AND SPECTRUM AT 1 WATT/2.56 AMP BIAS

The benefi ts of high bias current extend beyond simple harmonic distortion measurements – you also get a reduction of intermodulation distortion (arguably more important), and a lower, more consistent output impedance. As a corollary benefi t, the heavy hardware required to support Class A operation will show better thermal stability and will deliver better performance into diffi cult loads.

So what’s the down-side of high bias operation? In two words:

Many products on the market have idle power draw at a small fraction of rated power. A Class AB 150 watt amplifi er channel with 0.1 amp bias will idle at about 10 watts. By contrast, an X150.5 channel has that power rating but idles at about 100 watts. The high performance of an X150.5 comes at a price.

So far we have only talked about push-pull Class A bias. Do the effects of high bias also apply to single-ended Class A bias? Yes, but in a slightly different way.

Single-ended Class A bias is where a single gain stage operates against some variety of current source, as compared to push-pull Class A where two complementary stages operate in opposition to each other. Single-ended Class A is often thought of as the “king of Class A” by purists because it delivers the lowest order of harmonic distortion, 2nd harmonic, instead of the 3rd harmonic of push-pull.

It also is the least effi cient of the Class A confi gurations, with an effi ciency fi gure on the order of 20%, sometimes less. A limitation of single-ended Class A operation is that the peak output current is limited to the value of the bias current. By comparison, pushpull Class A can deliver twice the bias current as peak output in Class A, and generally much more than that in Class AB

In 1991 Pass Labs developed a hybrid class topology which paralleled a push-pull Class A output stage with a current source which biased it into single-ended Class A. The Aleph 0 amplifi er operated as a single-ended Class A amplifi er to its output rating of 75 watts into 8 ohms, and at currents beyond that it continued to deliver current as a push-pull Class A circuit.

Subsequently in the X amplifi er series we retained a small amount of single-ended Class A bias on our output stage as a means of controlling the amount and character of the distortion at the lowest power levels – that all-important fi rst watt.

By setting the value and direction of a single-ended bias current in a push pull power stage you can reduce the distortion by canceling the second harmonic nature of imperfectly matched Q1 and Q2 halves, or you can arbitrarily select a desired ratio of second to third harmonic, depending on subjective evaluation of the resulting sound.Figure 5 shows a simple example of such a circuit. 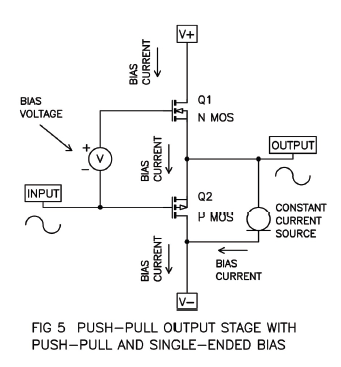 We apply a single-ended Class A bias at about 10% of the push-pull Class A bias. This is suffi cient to improve the performance around 1 watt and below. Fig 6 shows the distortion plus noise (again without feedback) of the earlier example output stage with a 2.56 amp push-pull bias and also with an added 0.5 amp single-ended bias. You can see a distortion improvement by roughly a factor of 2 in the low wattage region. Below 0.5 watts, you can also see the noise which is the same in both circuits. 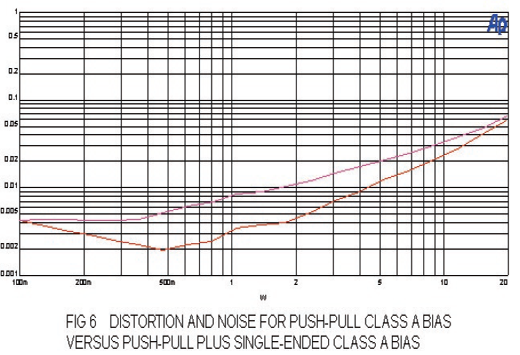 Like all bias decisions, the amount of single-ended bias and push-pull bias is a balance between performance and effi ciency. The bias is generally set at a level suited to the heat dissipation capacity of the hardware. At Pass Labs the bias is set to the value which raises the heat sinks 25 – 30 degrees C. above ambient temperature. The result is a heat sink which you can put your hand on for about 10 seconds or so.

The whole point of going to this trouble is to build an amplifi er which sounds as good as possible. We fi nd that this is achieved by building a simple amplifi er which is intrinsically distortion-free. Getting that depends on a high bias.

Measurements are helpful at illustrating the differences between design approaches, but they are certainly not the last word in audio. If they were, then numerous other approaches would sound as good or better.

You can certainly imagine an amplifi er which operates with a low bias current but has the necessary amount of negative feedback and/or circuit complexity to insure that it measures as well. Actually, you don’t have to imagine it – such amplifi ers are for sale.

Do they sound better? We don’t think so. Our meters don’t go to zero.