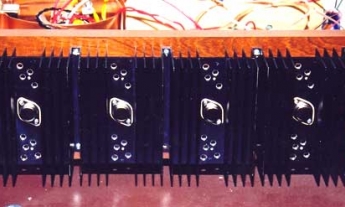 A little more than two years in the making, I can finally listen to my first home built amplifier: an A40! Where I could, I used exotic parts such as Shinkoh tantalum resistors, Black Gate caps, silver wire for the low-level signal, and silver solder. While it cost the same as two of my store-bought monoblock amps, it handily outperforms them! I know I've succeeded when my wife (who doesn't share my enthusiasm for audio) shows a preference for my new amp over the old ones! It's a dual mono approach that shares a custom wound 600VA transformer with four 24VAC secondaries. After rectification and 56,000uF on each rail, it provides 30VDC. For the output stage, I used MJ11015 & MJ11016 transistors from On-Semi. Various temperature (23c heatsink rise) and voltage measurements (0.50v on the source resistor) of the working amp reveal that no adjustment to the bias is necessary from the original design to accommodate the new output devices. The power supply going to the input stage (on the PCB) has been separated from the rest of the power supply (that feeds the high current output stage) by placing a diode and a 2,200uF 50V cap between the main filter cap and the PCB. Also, each large filter cap is bypassed with an AXON 4.7uF film cap. These modifications resulted in two effects: First, there was a very slight turn-on, turn-off thump that went to the woofer before the bypass cap was added. It is now gone. Also, the amount of hum coming from the speakers is reduced now that the input stage is better isolated from the power supply for the output stage. With my ear pressed up against the tweeter, there is a barely perceptible hiss. The offset voltage is about 35mV on one channel and about 45mV on the other. The completed dimensions of the amp are 18"w, 7.5"h, and 21"d and it weighs in near 50 lbs. I have attached a few pictures of the final product. Many thanks to Nelson for sharing his work, and to countless people at DIYAUDIO for helping me through some frustrating hurdles! I've assembled a full parts and vendor list on my web page: http://www.facstaff.bucknell.edu/esantane/movies/a40.html and would be happy to answer questions others may have while building their A40. Thank you for opening my eyes and ears to the pleasure of high quality audio! Eric