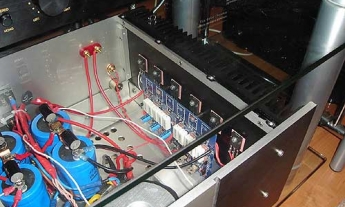 I am proud to tell you that I got my A5 finished for a few weeks ago. I did almost half a year of building him/her. In the beginning there were some problems, and I could not find out what! Both pcb did not work, but I was close I thought, so I went to a friend of mine, he has a oscilloscope and he is an electro engineer, so he helped me to find out the problems. There were only two parts on the motherboard who were wrong and that was it. I made the whole amplifier myself, except of the plates of the case, they were done by Schaeffer in Germany, I drilled all the wholes and put the wire in it, it was fun to do. Than I soldered the pcb's from KK and made the wiring, teflon coated insulated around the powersupply and to the output, teflon coated silver wire from pcb to mosfets and rca. First I got on one channel 500mv and on the other 25mv, so I decided to see if there was something wrong and yes there were some loose parts, I did put a few new ones on both pcb's and yes there it was. I now get10mv on one and 25mv on the other channel. It's sounding great, holographic, musical, airy. Thanks Nelson Pass and all the other members of diyaudio.com who helped me to do a job I never thought I could.