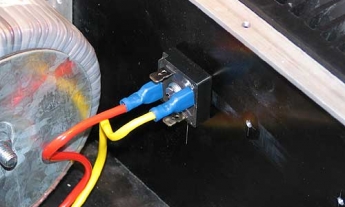 After months of hard work, I finally finished my A5 mono blocks to accompany my X-BLS. It was always a dream for me to own an Amplifier amplifier and I am very grateful that, after the production of these amplifiers stopped at Pass Labs, Nelson made the designs available to the DIY-community. Here are the specs of the A5 clones I made. Power Supply The transformer (2 * 25 Volt) of each mono block was sourced from Amplimo and rated at 625 VA. Bridge rectifiers (one for each secondary winding) are the ordinary high current (25 A) high voltage (600 V) types. Power supply caps are from BHC and computer graded. Each cap has 22,000 uF of capacitance and I used 6 of them in a CRCC-configuration. The 0.39 Ohm resistors used are rated at 10 Watts each. According to PSU-Designer the ripple should be something like 50 mV and I can assure you that they are deadly quiet. The final rail voltages are +/- 31.5 Volt. I "slightly" overrated the power supply in order to be able to run the amps with increased bias current. With the standard value of R19 the amps had a bias current of 1.8 Ampere. At this stage, no power supply hum whatsoever was audible when one of my ears was in close proximity to the woofer of my loudspeaker. After the removal of R19, the bias current increased to 2.1 Ampere and a very slight hum was now audible when I repeated the ear/loudspeaker-proximity experiment. The hum-level, however, was nothing to worry about. PCB and parts I bought the PCB from a fellow DIY-enthusiast here in the Netherlands and the beauty of the design is that it can be used to build various types of Amplifiers. In addition, it minimizes the amount of wiring needed because the MOSFETs of the output stage are soldered directly to it. Apart from the power supply wiring, it is only necessary to connect a loudspeaker lead (I opted for Van den Hul's "The Wind MKII") to the Cardas loudspeaker terminals and the input wiring (Teflon insulated solid core silver) to the Neutrik XLR-connector. As can be seen in the pictures, the PCB is placed above the power supply caps and between the heat sinks. Both the IRF9610 and IRFP240 MOSFETs were matched. The DC-offset due to the mismatching of the IRF9610s is 12 mV for one channel and 4 mV for the other one. Very nice! I bought Black Gate Standard 220uF electrolytes and after some weeks of running the Amplifiers I replaced the cap in the feedback-loop with a Black Gate N-type (470 uF/16V). This tweak, which I stumbled upon at the Pass Labs Forum at DIY-Audio, proved to be very worthwhile: it increased the transparency of the amps without harming their smoothness. Heatsinks and Casing The heat sinks used (Junior Kuhlkörper JK 1170) are 40 mm deep, 300 mm long and 170 mm high. To finalize the casing 3 mm sheets of black anodized aluminium were used. The ventilation holes in the bottom and top plate were laser cut. The amps can be touched for approximately 10 seconds before it becomes to uncomfortable. I considered this timeframe "Safe to Touch" for my two infants that wander through the dwellings in search for something adventurous to do. The front panel was made by Schaeffer/Front Panel Express and consists of two parts both of which have a thickness of 4 mm. I think the amplifier has a nice clean and understated look. As to the sound, I can remark that they sound simply marvelous. It took me some days to get accustomed to the way they sounded because the sound is so different from the amplifiers I heard so far. The amps give recordings a nice sense of unity, which make them real music makers, and time-after-time I find myself being mesmerized by the music instead of being distracted from the recording due to your typical HiFi-issues, such as imaging, spaciousness, air and what have you. The music comes to you in a wholly organic way that is definitely not upfront. The amps are very detailed yet very smooth at the same time. If this "sounds" contradictory than consider it is as an illustration for the fact that I needed a couple of days to get my ears/brains adapted to the amps. The differences between recordings are very obvious, which highlights their potential to appreciate the meaning of the pieces performed. The dynamic range of the amps is also literally breathtaking: the tiniest nuances of recordings are audible and more than once I found myself holding my breath in order to be able to hear them. The bass is not a weak point of these amps: it goes very deep and is nicely layered. Definitely not of the blurring one-tone variety. I can go on with compliments like these for a long time but by now I think you get the sonic message I am trying to get across. Thanks Nelson for being so generous to the DIY-community and the participants at diyAudio.com for sharing their expertise. Jan-Peter Vos The Netherlands