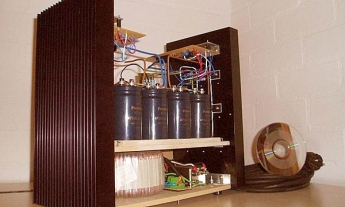 After two years of gathering parts, I've finally a working A5. As an electrical engineering student it's hard to find the funding for all the parts. I chose to build both channels in one casing, mainly because of the transformer I could get for a couple of euro's. It isn't finished yet, but from now on there will be only cosmetic changes on chassis and connectors. For the power supply I've used one 630VA transformer with two individual center tapped outputs of 28VAC. So both channels have separate windings. After the rectifier I used two 63V 47.000uF Panasonic GAA capacitors. The DC output of this supply under load is 32 Volt with 190mV ripple. No CRC or CLC filters at this time, because there is (almost) no hum on the output (20mVPP max). Because I etch all my projects myself, I chose to use self-made circuit boards. Only the low current section has been put on the circuit board, the power stage section is point2point connected and mounted on the heatsink. The heatsinks are salvaged from a switching power supply, and are approx. 0.29K/W each. At the current bias level of 2 amps they get approximately 60 degrees Celsius (140 F). But nobody will touch them, except me.

At this time, the chassis has been build of wood. Not very solid, nor really nice to see but it holds the parts together. I'll build a new one out of aluminum later, but still have to decide if I'll build one amp, or two monoblocks. I'll also add a DC protection and slow start circuit later. As for the sound: just amazing! Compared to my Technics SU-8044K it's like a whole new dimension has opened in my room. From flat, to nice dynamic and perfectly placed music. I'll spare you from all the expressions usually found in audio reviews, but to me it's a great amplifier worth all the work and costs. Until my Amplifier 1.7 pre-amp is build, I'll use my Marantz 1060 (isn't she a beauty?). New speakers will be bought or build in the future for an even more exciting audio experience. I would like to thank everyone for there help, especially Nelson! Without all the topics and schematics found online I most likely would have seen a lot of smoke before the amp worked. Erik Hoogma, The Netherlands. erik-at-hoogma.net