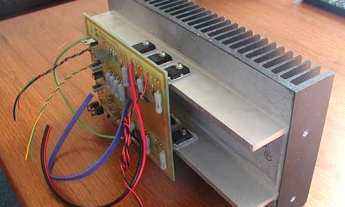 Having built an A4, I was a very happy man. I had an amplifier which produced adequate power, was not so large & heavy that it could not actually be lifted (cf my Son of Zen) and was exceptionally pleasing to the ear! Some time passed and I began to feel a little uncomfortable. I had built my A4 at the very beginning of the "Attack of the Clones" and as it really was a proof-of-concept project I had done a number of things "on-the-cheap" (most significantly being the under-rated power supply). Further, the less than ideal appearance of the amp had a low WAF (wife acceptance factor) rating. So .... I decided to build a "proper" Amplifier, which would become my ongoing living room amplifier. I chose the Amplifier5 because I felt it represented the best compromise for me in terms of power output and heat dissipation/hardware requirements. I was significantly influenced by the outstanding monoblocks by W Sankey ( http://www.passdiy.com/gallery/Amplifier2-p1.htm ) and managed to find some appropriate heatsink to use as the sides of a stereo case and embarked on the current project. For those interested in details of how I went about this please see my website ( http://www.users.on.net/~mefinnis/index.htm ) - this includes a detailed description of all aspects of this project, links to the suppliers I used, the PCB layout etc. Again, my thanks to Nelson, who's support for the DIY community has been inspirational to many. cheers, mark PS: Yes, it sounds just fine!