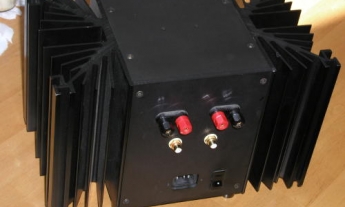 It seems like Zen projects become popular again after almost 10 years from their beginning. And since competition is knocking on a door (Jam knows what I'm talking about) I decided to present here my first Zen amp, which I built after reading the original article in AA '93. The case was as usually influenced by the heat sinks type, which BTW, I bought dirt cheap at CAD$10, surplus. I was still under the impression that Wima caps supposedly sound pretty good, but later added MITs, which clearly improved the sound. I also used good grade Nichicon Muse as coupling electrolytics. These were the times when I was a fan of PCBs and a perfect order in all my constructions. So you don't see much wire. Even binding posts are soldered directly to PCB. The filtering capacitors are mounted on separate board, which through brass spacers connects to main board. Everything is pretty tight but I still found the place for inductors. Heat sinks can be easily removed for access in case of troubleshooting. The chassis influenced by Aleph designs was done from 1/4" aluminum and anodized black, everything hand made. This is actually my favorite Zen amp and I will probably never get rid of it. One advantage is its small size. The sound has unique flavor, although I prefer more forward character of A75. Aleph 5 sound (which I built recently) is IMO between Zen and A75. One last pictures showing the detail of capacitor mounting and removed front plate. This is probably the simplest way to put together solid chassis, if you don't mind of course 1/2" aluminum bars. Transformer, soured from Plitron, is mounted to bottom plate, which is not removable. Peter Daniel