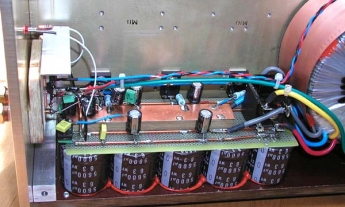 I have finally finished my first Amplifier! It has the voltage and configuration of A5 but is done as monoblocks and the bias is lower because the heat sinks are too small. It already has a nickname of a "Toaster Amp" but for me it might well be the cutest amp I've built so far. The whole chassis is alodined and that's where the gold shine comes from. Top and bottom is done from fibre-like material. Binding posts are modified Music Posts. As usually I decided to wire everything. The input board is mounted on front panel and is attached through the binding posts nuts. I used a small heat sink for all 3 Mosfets. PS caps are glued with red RTV to the bottom plate and transformer is mounted on one of the heat sinks. Transformer is shielded with copper. I'm using 120u Panasonic HFQ caps for bypass and 2 separate bridges for +/- rails. I made those legs out of 3/4" aluminum rod. This is how front end is wired. That circuit is so simple that no board is really required. I had some problems with running second channel and I suspected damaged Mosfets in that circuit. Took me really quick to replace all 3 Mosfets and I was back in business. As you can see I'm using fibre plate to separate the heat sink from the chassis, that plate also acts as an insulator for binding posts nuts. After I decided on the layout, putting that circuit together was like putting together PCB. The only hard part is to take measurements when testing amp, the access with probes is really hard. There is a nice bus bar in the center made out of Goertz flat wire. It is for the output and source resistors and drains of output devices are connected there. From here, Caddock 0.1 resistor connects to the output post. And this is how it looks from the top. I didn't use any compensating caps, not even 10p. I tested first channel on the scope and it looked clean, second one has some small spikes below 80Hz. I bought the heat sinks surplus. They were alodined originally. I got 1/4" aluminum material for front and rear plates at surplus and it was kinda gold as well. Because it was scratched in some spots I tried to brush it of with Scotch Brite. And then the problem started, because I brushed off the gold finish that matched the heat sinks. I didn't know what to do about it, so I realized I had some alodine left from my work with aircrafts and since I knew it makes aluminum gold I brushed off the rest of the finish from plates and put them in alodine bath. After couple of minutes they were gold again and looked like before. So I came with that idea that alodine might be a cheap alternative to anodizing, of course if you don't mind the gold finish. It protects against corrosion and finger marks. On my amp when combined with dark brown top cover that finish looks really cool. As to the sound, I can only compare it to A75 which I have been using for last 7 years. In my current bi-amp setup I'm also using that amp as midrange and tweeter amp so I won't comment on bass control. But after replacing A75 with Amplifier I wouldn't go back. The tonal character is similar but Amplifier presents sort of liquidity and easiness to the sound, making it more natural. It also seems like more notes is coming out of speakers. The soundstage might be slightly bigger but not by much. A75 is more SS sounding. Peter Daniel