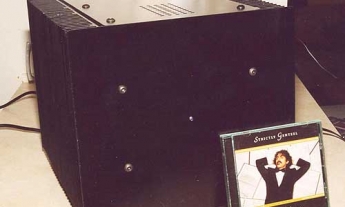 It is not too exciting to look at, but maybe the story of its construction is worth reading. I built it on a small section of my kitchen counter. Apartment living has its drawbacks. Picture captions: Build 1, Build 2: shots of PSU and boards mounted. Build 3 One channel and one end attached Rear - yep, it has connections Front - the Blue LED is on, though you cannot tell. Looking forward to attaching my PassDIY logo to this amp. Thanks for a fun project. An AX is on the horizon. Bob Ellis The story: I remember thinking that I'd like to build the A-75 way back when the article was first published. I started collecting parts over 5 years ago. I had started a 4-channel Leach amp when I stumbled onto the Pass Labs DIY page (when it was still part of the commercial page.) I had bought a couple of massive toroids, 2 x 42@11 amps for the Leach amps. Hmm. 75 Watts ought to be plenty, but since these are going to do double duty as HT amps why not bump the rails up to get more power? I used IRFD210/9210 for the input differentials, figuring that I'd get a little safety factor with the higher voltage rating, and lower input capacitance wouldn't hurt, either. I bought two sets of Old Colony boards (front end & PS). I planned to use one as a line stage, but when it came time to buy parts, hey you probably need to buy a bunch of IRFP240/9240 to get two matched sets, so why not buy enough to build two stereo A-75s and biamp? I bought three sets of 12" x 4" x4" forced air heat sinks at Apex Jr. Used one for my 4 channel Leach amp, and planned to use the other two for the A-75s. I built up the front end boards. There are two spots labeled R24 (one being R81), but nothing a bit of trace following couldn't fix. At the time I finished the front end boards I didn't have an oscilloscope or Variac. I fired it up first with a 12 volt transformer to verify basic operation, then used a 30 volt transformer to run it at +/- 50V. Boy, are those CCS trimpots sensitive! If I were to do it again, I'd go for multi turn types. After setting the offset and bias, I swapped in 12 volt zeners for the 9.1 volt reference in the power supply to bring the rails up to +/-65V. I figured that 84 VCT for the output supply would give me 55 volt rails, so I wanted the 10 volt margin of the original design. The IRFD210's seemed pretty hot. I expected that the dissipation would be up around ½ watt (they are rated at 1 watt) but they were too hot to touch. As a preamp, it sounded very nice. It was motorboating at first, but moving the power leads cured that. I read on DIYaudio.com that I should add local bypassing for the power supplies, but didn't do anything about it yet. I soldered copper tabs on the drains of the inputs to cool them. The project stagnated while I considered my options for a case and output stage. Work kept me away from it, for a while, too. I started drilling and tapping the heat sinks for the output FETs. Broke a tap and got frustrated. Then I found a case group buy at DIYaudio and bought two - never did like the idea of a fan. It was a bit smaller than I had planned, 8"w x 14"d x 10"h, but I figured that I could squeeze everything in there. After much tinkering with the transformers, caps and boards, I finally figured out how to make it all fit on three levels. I'd planned to add a soft start internally but there wasn't room. I used 6 15,000 uf/100 Volt caps per channel, 45,000 uf per rail. (Apex Jr. again) They are 2"d x 3" high. So they have a level to themselves. I also added a small 60VCT transformer for the regulated supply, figuring that the doubler running off 84VCT would put the regulator dissipation too high and threaten the doubler capacitors. Along the way I purchased a used O-scope, a Powerstat and a drill press. Projects are an excuse to buy tools, right?