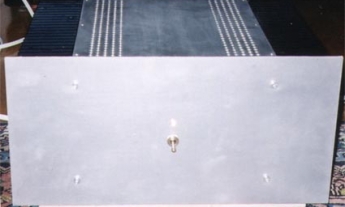 I have successfully built a clone of the A30 amplifier. It was a lot of work but definitely worth it. This amp sounds really nice! Maybe a bit more analytical and metallic than my tube amps (PP EL34 and 6V6GT), but still sweet enough and very detailed. As expected it gets quite hot, despite large heatsinks (see below). The amp is driven with a passive preamp which works nicely. The speakers used are ME2:s (bookshelf Ariels for those who didn't know that..). Lynn Olson himself didn't like the Ariels at all with Amplifier3, but I think this combination works excellent. Perhaps an analytical sounding source can make things ugly... so far I have only tried a Technics SL-PS7 which is a little on the soft side. My amp uses six IRFP150 (easily available in Sweden..) per channel. The amp was first built point-to-point, but this got really messy, so I decided to make pcbs instead. This took quite a while since I had never done it before, but the end result was good. I used Mark Finnis's Amplifier4 pcb layout with some minor changes. The heatsink used are four 0.3 deg/W versions (from ELFA). Two of them are stacked on top of each other which forms the sides of the chassis (see the pictures). The rest of the chassis is made from standard aluminum. I use a 500VA 2x18V transformer (common for both channels). This means that the rails are slightly lower than specs; it lags down to about +-22V. Bias is about 2.5A per channel with the resistor values given in the schematic. The rest of the psu is as simple as it gets; a 50A bridge and 8*15000uF/50V. Thanks a lot to Mr. Pass for publishing his designs! Regards, Claes Ericson Linkoping, Sweden