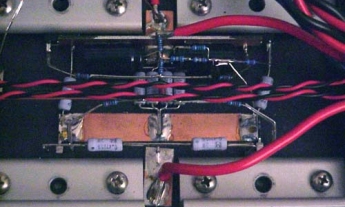 Enclosed are some pictures of my DIY interpretation of your A3 design from your online service manual schematics. These were built using mostly surplus parts to keep the costs down. Each 16" x 8" x 4" heatsink carries the parts for one channel, and these mono amps draw power via detachable cables from a single external power supply. The power supply contains a 1000va transformer and 1 1/2 farad of capacitance (overkill, but they were free! the other caps in the background bring the available capacitance to 1 1/2 farads!). The amps themselves contain local power supply bypassing in the form of 40,000 uF of capacitance bypassed with film caps. Keeping with Nelson's philosophy, I used standard parts available from digikey, and avoided all the high dollar esoteric parts, instead concentrating on layout and power supply improvements. The amps were wired point to point. I made this easier by first physically clamping each power device to the heatsink and using those set positions to wire everything else. In the output stage the heavy power conductors are 1 ounce copper pcb material cut into .5" strips to make a nice, low resistance, mechanically solid conductor. All the conductors are reasonably far apart, and conductors cross at right angles where possible to minimize interference and noise pickup from adjoining lines. The power wires that go to the input stage have their own supply and return lines to the local bypass caps and are twisted as well. By having separate supply and returns for the input and output stages to the local supply caps, I hope to have minimized interaction between the output and input stages through the current and resulting voltage drop across the high current supply lines during transients or what not. The high impedance input section of the amplifier has very short signal paths to minimize noise pickup. The components in this section basically have their leads cut as short as possible and are soldered directly to one another. I am thinking about giving the input section its own bypass caps or power supply, but i'm having so much fun listening to the amps that I don't want to take them down to do it! My previous prototypes of the A3 were wired on a pcb. The new point to point versions don't sound much different. They do have a little less hiss and power supply noise at the speaker, probrably due to the separate input stage power lines. There is a minimum of "added" conductors in the circuit as well. Almost all of the components were soldered lead to lead. The only extra wire needed was to wire up the output stage and to provide power to the amp. The signal paths are about as short as they can reasonably get. I recommend this type of construction to anyone who is thinking about building these circuits since they are simple in nature. It was a whole lot more fun building them this way, and I personally think that they're much cooler to look at than pcb wired amps! The time it took to wire each amp was approximately 5 hours each, which is pretty reasonable if you factor in the time it takes to design and fab a pcb. The sound of the amps is wonderful. The main thing I notice about these amps is that they seem to have unlimited dynamic capability, which seems contrary to the 30 wpc output (60 into 4ohms). I can honestly say that 30 watts for me is more than enough, and these 30 watts are driving 87db sensitivity dynaudios! Compared to the zen, which paralleled didn't drive the dynaudios comfortably at high volumes, these A3 amps are much more dynamic. At moderate volumes, they sound similar, although I favor the sound of the zens slightly. To me they sound a little sweeter. Keep in mind that the Zens were built using holco resistors and black gate caps, and cost much more to build than the A3's did. They are pretty much identical in terms of resolution although I think the A3s may have a slight edge because they are slightly less noisy. Those low level cues make a big difference! Thinking about it some more, even though the sounds of the Zens is slightly sweeter, I don't think I would give up the dynamics, bass, and driving performance of the A3s. Drums are much better now than ever before with the A3s! Needless to say, I am enjoying the amps very much. In summary, I am very grateful that Pass Labs is such a heavy promoter of DIY audio. I have learned an immensely about amplifier and electrical design in general from constructing many of his DIY projects. It is really gratifying to be able to put together a circuit with not much time or money and have it subjectively outperform commercial products costing much, much more. I would also like to recognize my co-workers, who as electrical engineers, had many useful suggestions and helped me keep things in perspective in the crazy overboard world of hi-fi. I wholeheartedly recommend that all of you go out and build a Pass Labs DIY design; you won't be disappointed! I can be reached at .(JavaScript must be enabled to view this email address) welcome any suggestions, comments or questions about my A3 projects! Norman Chow