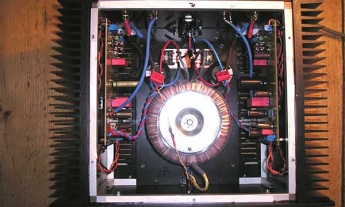 Hello! I've started with more serious DIY around 2,5 years back - my first serious project was Zen v4 - soon followed by matching Bride of Zen. This was not my first attempt to put together one of Mr. Pass's project - quite some time ago a friend of mine and I already tried with BoZ project - put we were not so successful at that time - the main project was serious lack of money (we were still in high school then) ... And so - it was autumn 2002 when we decided to try it out again! This time much more successful! From then I've stared with some other Mr.. Pass's project (this time from Aleph series) but none of them aren't completely finished yet. Back to my Zen v4/BoZ pair: since their first birth both of them evolved quite a bit (better parts, some different internal placement of PSU parts and main boards in Zen's case, some changes in external look, ...) - so in a way they could be addressed as Zen v4 mkIV and BoZ mkII nowadays - but I also think this is their final point and I won't "investigate" further - Alephs are knocking on the door ... PCB's for both were drawn and made by my friend Leon (already mentioned above) - original layout would be problematic for us - since good MKP capacitors easily available here in Slovenia are more or less Wima's - and they are huge comparing to Panasonic ones! BoZ is pretty standard one - simple small Alps 10k pot at the output, 3 inputs, tape out and 2 pre outs. Chassis is derived from standard Al "box" with external dimension 200 x 200 x 100mm - but with added plexi front - that gives mirrored look. The upgrade to "mkII" was replacing ordinary Jamicon capacitors with mix of Panasonic FC, Cerafine and BG ones. And replacing Wima MKS with MKP. Maybe it was more the subjective impression - but I think it was an improvement in sound! Transistors are Fairchild's irf620. Zen v4 was more interesting as a project - first intended just as a project to spend parts that were "laying around" - it just happened I had appropriate pair of heatsinks and a trannie - and that's already a lot in the budget needed for classA amp! So gathering together parts for my Aleph (what took a lot of time) I said to myself - why not build a Zen and see how it works!?! So first version was build with standard parts (Jamicon elcos, Wima MKS, Kimber 4PR cable), transistors used are irfp250n, trannie was 360VA 1x36V one. But then a guy I know (who is a pro for chassis building - thanks again Sandi!) helped me with the chassis "problem" - which then turned out to look so well - I decided "little" Zen will get his chance for some upgrades! So during this time he got Wima's MKP, Elna's RJHs, some silver internal wiring, "new" transformer - this time 2x35V one - so now it's a real dual mono one, ... And the last was replacing 10000 Jamicon at the output with "only" 2200uF Pan FC - and I think that this was the biggest sound improvement from all! And I also rearange the internal placing of different parts - first version was a kind of a "doubledecker" with circuitry above PSU - last one has circuitry straight on heatsinks - and with some careful wiring placement - the hum is now completely NOT audible - before you could hear from around 1m and closer to speakers! Zen runs at aprox 2A bias - and so dissipates around 100W/channel - the heatsinks are Fischer ones - 250 x 145 x 40 mm with 25 fins and according to datasheet they should be pretty close to the safety margin - well in reality max temp. is around 60°C what I find still acceptable! Also the bottom and top are perforated for better internal cooling! There were some comparisment made with Rotel RA 970 and RB 970 - and I think all that were present at that time agreed Zen is quite superior - it played music whilst Rotel's reproduced music signal if you know what I mean!? Zen added "soul" into the music. I've also done some comparisment with my actual amp at that time (Unison Research - Simply 2 - SE based on EL34 with around 12W/channel). Well - in that comparisment Zen And UR were pretty much equal by my opinion - considering the price of UR that was a big achievment for Zen (and it must be said that that was first, low cost version of Zen!) - so there must be something in that that Mr.. Pass's amps are tube sounded transistor amps!

Well - UR was sold and Zen stayed - so I think you now who the final winner was! Later my friend Leon finished his A5 and AL - and of course we compared them (and also other combination with those 4 (pre)amps) - I admitt: A5 is considerably better for my taste than Zen. But I also think that AL is quite a better match for Zen than BoZ! Zen/AL represents quite a good value in mine opinion! That was a combination that stayed in my system for quite some months!! At the end I would like to thanks Mr. Nelson Pass for his extreme generosity to shear his DiY and ex-commercial products with us and to participate on a diyaudio.com - you're really a big man Mr. Nelson! Greetings from Slovenia Primoz Suntajs PS: if any information needed - you can freely email me to: .(JavaScript must be enabled to view this email address)