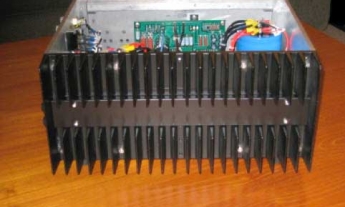 Hi Nelson: Here are some photos of my recently finished ZenV4. It sounds great! I built my first amp in 1978, but this is my favorite of all (so far! I have to get my A-75 running, and then maybe I'll build an Aleph or two next!). The first photo shows a side view of the heat sinks around which the amp is built. Those of us who have been around a while may recognize they are from the old 250wpc monster amp Heathkit offered in the 1970's. I bought the sinks (only) in 1980 from Heathkit and they languished in my garage all that time, waiting for the right project to come along. I realized with a great thrill last fall that the ZenV4 was probably it! The second photo shows the front end of the amp, with the requisite blue LED (unlit in the photo). I had to experiment to find an R that would yield the right luminosity. I sized the panel so the height (set by the sinks) and the width had an exact ratio of one to ..618. This made for just enough room inside, as can be seen in photo four. The third photo shows the rear panel, with ordinary 5 way binding posts, but very nice Cardas jacks, courtesy of Rodd Yamashita at diyaudio. There are two primary fuses because everything from the fuses forward is dual power supply: two fuses, double pole switch, two AC caps, two transformers, two inrush limiters, etc. The fourth photo shows the interior layout, complete with boards from Pass Labs, and two 320va toroids. I drilled a series of holes along both sides of the bottom plate (.25 inch thick, like all plate in the amp, sourced mostly from Boeing surplus near Seattle) to provide a little flow. Caps are surplus 23,000 microfarad units I picked up years ago and, like the sinks, were waiting for a home. I reformed the caps slowly, using a Variac, and made sure they had no "double plus ungood" attributes, as you warned about in the A-75 article. The sinks turned out to be just about right, thermally. The last photo shows my temperature probe taking a measurement at the hottest point, near the center bottom of the sink base plate. After about two hours this hits 53 to 54 Celcius at that point. The fins, top, and ends of the sinks are a lot cooler. I may take the old functionally useless T0-3 covers off sometime and put a flat copper bar in their place to help spread heat more. Right now, I am too busy listening to the amp! Nelson, I want to thank you for what you have provided, and continue to provide, to the DIY community. There are lots of kits and such out there, but NOTHING ELSE in the rarefied atmosphere of Pass designs. This has, of course, been true since the A-40 way back when. It is still true, close to 30 years later. Sincerely, Larry Wright ("Zapped" on diyaudio forum) Seattle area p.s. - it was fun to see Dana K. in the recent speaker article. Twenty years ago, he and I were fellow members of the Pacificnorthwest Audio Society. You actually paid our group a visit, and I recall your presentation was great fun. L.W.