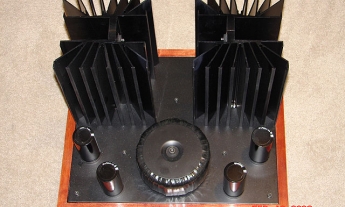 Nelson, Here are some pictures and comments on the Zen version 4 I completed in October 2008. Having completed the Zen revisited I turned my attention to the zen version 4. I was interested to hear the impact of a regulated power supply and a buffered input. The board were no longer avaliable from Pass Labs, however Mr. Pass had left behind the gerber files. Using the gerber files I sourced two "bare bones" boards from advanced circuits. Stuffing the boards is an easy task compared to creating a chassis that is functional and attractive. The chassis is constructed of cherry wood and 1/8" aluminum plates. The heat sinks weigh 9 lbs. and have 1000 sq. in. of surface area each. At a room temperature of 71 deg. the heat sinks reach a temperature of 117 deg. Transformer is an Avel Y236852 625VA 35v+35v. The four capacitors are 63v 27,000uf. The overall design was to resemble a tube amp, but everything I make winds up looking art deco. A side by side comparison with the Zen revisited left me with the following impressions. The Zen revisited has good bass, vocals stand out, but has some distortion in the highs. The V4 has cleaner highs, a strong midrange, but lacks the strong bass of the Zen rev. Time to build the F5. Chris Cyrus