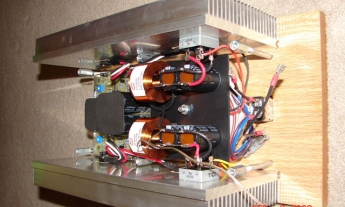 This is my first Pass DIY project. I decided to build the zen amplifier because of the pcb boards being available from Old Colony. I imagined that the boards would make for an easier first project and keep the interior tidy. I started and finished the amp in 2006, but didn't hear it for the first time until 2008. My first problem was that the source, drain, and gate were labeled backwards on the stuffing guide. After storing the amp for two years I decided to retrace the circuit schematic to the board and found the issue. Voila, one channel worked. After a lot of searching, the zener diode on the left channel had shorted out. After replacing the diode I began to feel the warmth from both heat sinks. I used the original zen parts list with the exception of Q1-NTE2375, Q2-IRFP9140, and a Avel Lindberg Y236652 250VA 25V+25V Toroidal Transformer. I also added a pi filter to the power supply with a 2mh air-core inductor and 20,000uf of additional capacitance per channel. The heat sinks weigh 6 lbs. and have 480 sq in of surface area each. After an hour the heat sinks temp stabilizes at 145 deg. F. The Zen amplifier is driving a pair of Klipsch kg 1.5 speakers and I'm using a mp3 player for the source. I was just happy that there was no smoke and it didn't catch on fire. But I was ecstatic when the sound quality far exceeded my expectations. There is no audible hum at the speakers. The highs are crisp and clear while maintaining a smooth natural sound. Mids are defined and vocals are well pronounced. Bass is full and deep. This is one of the best sounding amps I have ever heard. Thank you Mr. Nelson Pass. Chris Cyrus Ohio, USA