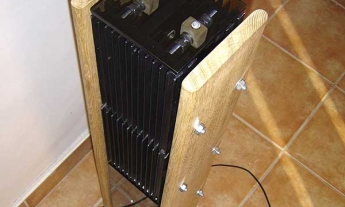 DESCRIPTION My Zen was built back in 1998 and lately I became tempted by the idea of trying to let it compete for being posted in the gallery, stimulated by the perspective of having a Pass DIY sticker on its front. There is almost anything particular about it, except maybe its chimney-like shape, which helps cooling by convection and the use of N-channel FETs for the current sources. I had to do so because P-channel power FETs were inavailable at that time here around; later I was pleased to notice that this tweak was implemented in many Zen improvement steps to come. Each channel drains about 2A out of a single 32V supply rail filtered by a 51mF capacitor. Hum is present, but is reasonably weak. Because of availability, I used generous output capacitances (30mF per channel), which allow the speakers to be efficiently driven by down to 1Hz test signals. However, this feature is unfortunately not very useful, as I use exponential horns equipped with Jordan JX92 speakers, which stop responding above about 40 Hz. The sound of the combination is very pleasing, judged both by me and some of my friends as being very accurate and natural. Although some consider that valve amplifier sound has "that something" which lacks solid state, I think listening to deliberate distortion should not be accepted and encouraged, even if psycho-accoustic effects may be touching. Mr. Pass, please receive my sincere thanks and congratulation for the admirable trend you succeeded to set among audiophilic do-it-yourselfers! Alexandru Cota .(JavaScript must be enabled to view this email address)