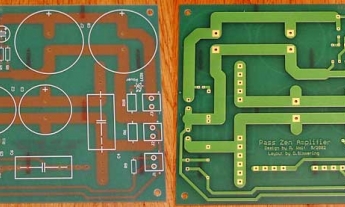 Hello, Here are some pics of my first amp. It's a Zen because its simple to build for a newbie like me. I decided to use single sided boards with silkscreen and solder mask, one board for the amp and one for the psu, both 12 x 12 cm. With some luck I found a friendly guy who did the Layout with Eaglecad. It was a hard way (because I always want changes in his layout), but at last he did it. Next I mailed the layouts to a company that make the boards for me. Another company made all plates and the lettering with a CNC machine. The idea for the cases was a 20 x 20 cm cube, so I ordered two 20 x 20 SK47 heatsink from Fischer electronic (a German company). I populated the boards with normal stuff (there is place for the infamous black gate capacitors too). The test was pretty good (there is a little thermal problem and I will add a fan under the case later). On the last picture you can see the first use with the Lowthers of a friend. You can hear a very small hum if u put your ear 1 cm in front of the speaker it has 97 db efficiency (his 300B did it too but it was another kind of hum). The Zen sounds so good that my friend is thinking to build a pair too. That is a good compliment to Nelson, he made a great job with the Zens (with his other stuff too). It was a totally random that I found the pass diy site, I know who is Nelson because my first serious amp was a Threshold Stasis 3. My next project is a Aleph 5

My thanks goes to Nelson because he shares his knowledge with the diyers in the diyaudio forum. To Dietmar, who made the layout and to Reinhard because he helped me with some good tips. Reinhard Wolf Bonn, Germany