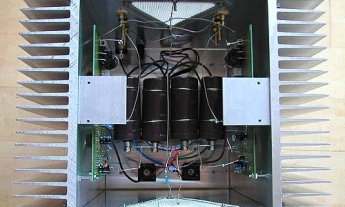 I'm revisiting your DIY gallery. My Zen is upgraded into the Variation 2 (Penultimate) with the original 32 volt supply. Yes, distinctive improvement with powerful and clean bass and in 3D soundstage. I didn't advance on the Variation 3 or Aleph because I'm a DIYer pursuing simple design with few components. Probably, the best reason could be that for me the Variation 2 itself works great for CD and DVD music. In the Variation 2, I was curious on the sonic effect of the input and output bypass film capacitors. The bypass caps of several different types were, however, found not helping my Zen in sound. Accordingly, I let myself forget the bypass caps and cut them off. I played with the input resister, R2, which is the part of the negative feedback loop, by changing values. I finally tuned it up with 1K ohms. It gave me two things: virtually no noise on the idling condition and a well-trimmed tweeter sound-but at the cost of reduction of voltage gain. My Zen Variation 2 has the size of 330mm x 250mm x 230mm (W x H x D). The case is made of aluminum with no painting. I like the look of real face and raw material than painted, if possible. The Bride of Zen controls the Zen Variation 2. My BOZ has not only 5k-output-pot, but also 60k-input-pot. Since the Variation 2 much reinforced the bass sound, I also strengthened the tweeter sound of my Ariel speaker by increasing the tweeter cap, C1, from 5.4 to 6.4uF. To reduce diffraction, however, I attached a file ring having outer diameter of about 80mm, inner diameter of 25mm and thickness of 10 mm around the tweeter. I was happy with BOZ and Zen, and now I'm happier with BOZ and Zen Variation 2 for many different kinds of music. Thank you again, Nelson Pass and Kent English. JH You June 2002