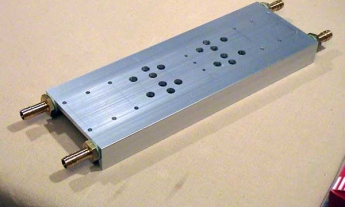 About me
Hi Nelson I'd like to add my thanks to you for sharing your Son of Zen design. I find the SOZ design particularly delightful because of its elegance and performance despite (because of ?) its minimalism. The writing style in the original article is also a delight. Attached are some pictures & details of our our twist on it - water cooled / switch mode supplies. Perhaps the smallest Son of Zen ? And more amusingly, an constructional approach that COST EFFECTIVELY scales all the way up to 50 watts, to match the scalability of Mr. Pass' elegant design. I have built much more "serious" amps (class A parallel PP 813 ?) but never a project that was so much FUN. We ended the same evening we started out construction listening to it play beautiful stereo. Thank you !

From a constructional perspective, the overwhelming challenge / cost in building a Son of Zen lies in providing that much clean power, and dissipating that much heat. Switch mode supplies / water cooling solves both problems neatly. We didn't need big caps (in fact we didn't use any caps if we exclude these inside the "closed box" power supplies), and this meant we had no issues with turn on surges or switch on/off thumps. Turn on/off is silent and completely free from drama. We built one channel on either side of the same heatsink, we even reused the same bolt holes. This of course allows me to consider my indoor pond (in the conservatory) as part of my HiFi ... that is where the pumped water comes from and returns. One "extension" of the published reference circuit was that we fed our SOZ with a balanced signal derived from Lundahl 1540 line transformers. This solution lets the SOZ float as well as removing all issues with hum - and optimizing distortion performance. The transformers need a 12k load to damp self-resonance, which neatly also served as the SOZ load resistor, and defined the input impedance. We completed the amp using 50 watt / 20 watt non inductive thick film resistors and mil spec Teflon insulated wire. Sourced from industrial distributors rather than esoteric audio snake-oil vendors the cost of such parts is perhaps lower than some builders out there realize. Since the FET's and PSU's came from a the trash at work (scandalous - unused recent production 700 watts a piece, but "obsolete") our SOZ cost us around £50 in total for a 10 watt (27 volt supplies) stereo amp. DIY should be fun, and at this price we were delighted and very happy to experiment despite having built more than a few more complex designs. We would like to have a little more power (since the design is scaleable) but the only catch for us is that telecomms normally works with 48 volts. (actually 54 volts since the PSU's normally have huge banks of lead acid batteries hanging off them to form a UPS). In this case we were using 24 volt (27V actual) supplies, and these float so we can stack them ... but it still means that the next step after 27 volts is 54 volts, ie the full 50 watts per channel output at 1200 watts dissipation. No its all or nothing. We have the power supplies & Fets. And I'm sure that water cooling can handle the heat. But this needs monster power resistors / networks and starts to run into "reasonable" money rather than just pennies. I'm curious - the original article shows a graph of supplies and dissipation right up to the 50 volt / 50 watt version (and notes the 1200 watt per channel dissipation). How many beasts have been built at this (or greater ?!) power levels? More than a handful ? (DIY'ers are a fearsome breed so surely some have been there already, but perhaps not many ?) 50 volt rails would put us close to the dissipation limit for the FETs. Still inside spec but outside your "rule of thumb" overrate by a factor of 2. We would therefore like to parallel the IRF240's if we go for this. A quite orthogonal question is that we (and someone else we know on the net who was considering building a SOZ) .. want (ideally !) to drive 1 ohm loads (Apogee Scintilla HF panels using the active crossover). As published, the SOZ really doesn't like this. (Hey, we are being UTTERLY unreasonable now - the Scintilla is notoriously low efficiency as well as a fearsome impedance.) Can anyone suggest revised resistor values to adapt the SOZ topology to such a load ? It will operate at very low voltage but very high currents. Paralleled FETs are perhaps essential. On any future build / rework, I would also consider adding a 50R , 100R multi-turn preset pot, 50R chain in parallel with R5 & R6 (the center tap towards R3 & R4) to make it possible to null out any DC offset. But most of all, I'd like to summarize that this project was great fun. It was fast, we adapted our design to parts we scavenged so it was very cheap, and it sounds great too. What more can you ask ? Many thanks Nelson. best regards Dave Smith