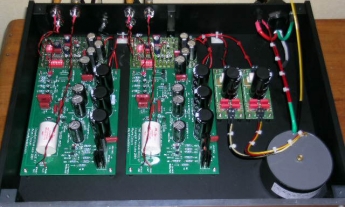 Hello Wayne, hello Nelson! After buzzing around in different DIY-audio forums, I finally was lucky enough to get hold of Promitheus who was able to provide me not only with a set of Pearl pcbs but who also managed to "extract" the MC-stage of the ONO in order to use it on the Pearl (thanks Ilias for this great piece of work!). As a friend of mine wanted a Pearl as badly as I wanted one, but his soldering skills were less developed, I got to set up two of these phonostages allowing some minor changes in components with a objective a - b comparison on their effect. Both Pearls were built with standart 1% metalfilm resistors except for the RIAA section where we used Welwyn 0.1% resistors. Except for the Zetex transistors, all transistors were matched (there again, thanks Ilias for the effort of helping us out!). The cabinets are self built of 4mm and 6mm AlMgSi.5 in anodizing quality. All pcbs are mounted on Delrin posts and the Cardas RCAs are hooked up to the boards with Cardas AWG 23.5 wire. I used custom made Hoffmann toroidal transformers which are effectively shielded and molded so that I could use them in the same cabinet as the Pearl without any audible or measurable influence. After some testing and comparing with a standart Pearl against a continueously modified version (all sort of fancy boutique components which did not prove to be worth the advertising), the only mods that stayed in my Pearl, were the Black Gate N coupling capacitors in both the MC-stage and the output of the Pearl. None of the Pearls was directly implemented in my system. Each one had to undergo a 200 hour burn in to provide objective evaluation. At first, I was struck by the quietness of the phonostage set at MC highest gain. From the very first LP on, the Pearl invited the listener to a longer stay than anyone had intended. It sounded warm, detailed, wide and deep in space with the required grunt in the bass (still lacking some punch in the lowest register), sweet in the hights without muffling and giving voices an incredible timbre (even more audible through my Aleph J...thank you Nelson my Mahavishnu Massa Bhana San!!!). The soundstage plays before a perfectly black background giving very sharp contrast in all sort of coloration and verve the music has to offer. A two year progress that has proven to be worth all efforts taken. Forunately my Mark Levinson gear got sold very fast... Thanks again for sharing your wisdom with the electrically chalanged...! Take care ya all!!! Christian Geldner of Mannheim, Germany