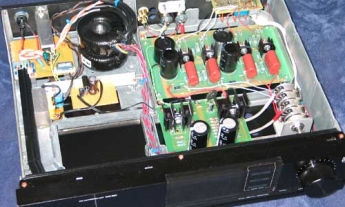 Presented is the metamorphosis of a Philips DAC960 into a BLS. The original guts of this thing was a pre production sample given to me by a friend at Philips circa 1986. I long ago had my fun with it and so when cleaning house thought it might do as a chassis for a balanced line stage. And it does. I was somehow inspired to this project after bread boarding two other copies of the BLS but never fully wrapping them in a pretty box. The musical results caused me to release cash funds and purchase an Adcom GFP-750 as my main system preamp. It's nicely packaged with a remote control. How could I do better since the circuit topology is essentially that of the BLS? So in my quest to make a neat looking finished product I purchased the BLS boards from Audio Express. Then fashioned a few support brackets, an input relay switch network, excavated a transformer out of a wall wart to power the relays and front panel lights. I successfully removed the decorative front panel bezel part and carefully sanded off all the silk screen graphics except those which originally designated the three digital input selections. The most challenging item on the mechanical side was fabricating the volume control mount so it would line up with hole in the front panel. The pot is four section precision 10k linear from a surplus scavenge. It's a bit stiff but turns nicely with the big knob that caught my eye in one of shops in Tokyo's Akihabara district. Just an editorial note about comparing the DIY line stage to the excellent sounding Adcom. I like mine better which eventually moved me to do the unthinkable. Yep, I've had a passion for the now discontinued Elna Cerafine caps and replaced the AC coupling lytics in the Adcom with the Cerafines. Seems to sound up to par with my home brew now. A bit sweeter with more depth. (fearless DIY at work) I've also built three copies of the Bride of Zen and prefer the BLS even when not being used with an amp with balanced inputs. Thanks to all at Pass Labs for sharing and inspiring the DIY community with so many projects. The music is great! Foy Wilkey .(JavaScript must be enabled to view this email address)