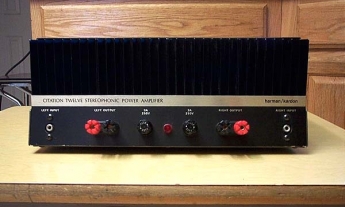 This stereo amplifier is the Harman Kardon Citation 12 modified per Mr. Nelson Pass TAA 2/81 article where input, driver, and output stages where redesigned. The input and driver stages used different types of bipolar transistors that were used in the stock amplifier but the output stage now uses Mosfet transistors, two per channel, and there is an AC fuse for each channel. All the components were removed from the original PCB. New parts were installed on the component and foil side of the PCB with traces cut and jumpers added. The output Fets replaces the bipolar output transistors mounted to the original heatsinks. The modifications in Mr. Pass words".... fit quite neatly into the original layout and provides for a state-of-the-art super-position upon a classic piece of circuitry, improving the speed and distortion characteristics in an even more simple topology than in the original."... which it certainly does. These are pictures of my modified MF-12 (Mosfet). This is my second HK-12 that I brought in the middle 90's. Back in the late 1980s I brought a stock HK-12 but never got around to modifying it and I traded it away to a friend, for what I can't remember now. I used the stocked HK-12 to drive my Acoustats 1100s which had a subwoofer. And the amplifier sounded pretty much as Mr. Pass mentioned which was that the Citation 12's has a veiled characteristic in the high end but the bass response is one of the Citation 12's strongest points. And I agree about the bass response, my stock amplifier was deep and powerful with my system. Mr. Pass also mentioned that there were several versions of the HK-12 manufactured. And sure enough the two stock amps were different. The first HK-12 was plain and looked to be as the one described in his article. This one pictured has small relays (don't work) that looks like Christmas tree lights that shorts the outputs to ground, an AC switch for choice of AC input voltages, and thermal breakers mounted on one of the transistors on each channel. After the mods the MF-12 is transformed into a much more musical amplifier than what it was. As Mr. Pass stated " The amplifier is sonically a significant improvement over the original, particularly in the high end where the Citation 12's veiled characteristic is replaced by a detailed, somewhat sweet sound. The imaging and midrange definition are also much improved; but the bass response (one of the Citation 12's strongest points) remains much the same..", which I totally agree happened. At first listen I thought I was listening to a tube amp. Sweet and smooth from top to lower midrange, and the bass was the same but with more detail. As I mentioned in my BOZ submission in this gallery, I tried the MF-12 with the BOZ preamp and the Totem Model 1 Signatures the sound was very soft and the MF-12 didn't do a great job of driving the these speakers. But I had a slightly modified pair of Audio Concepts speakers on hand that presented an easily load for the MF-12 for my listening evaluation. Later a friend pointed out corrections in a later TAA issue that addressed the option of using higher power output Mosfets. Thanks, FBJ