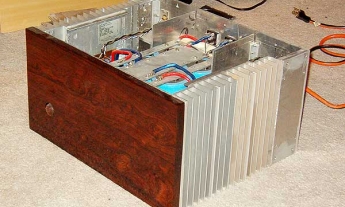 Dear Nelson and ALL at Pas Labs, After building the BOZ, I couldn't stand the idea of having to use my old commercial amplifier and couldn't afford my dream of a Pass Labs X so I ventured into the world of ZEN. After reading all of the articles several times I put together he following. I originally started out to build two ZEN's so that I could bi-amp my speakers, however, the second went through several morphs only to come out as a Aleph 5 described later. The chassis is constructed from scrap 0.25" plate. The heatsinks were cutout from an old PLC rack that was being thrown away. I had enough material so I built two chassis. For the ZEN I found some African Bocotti hard wood to make the face plate. I designed and made the circuit boards for the amp using Eagle. I then printed out the layout on Peel n Press Blue and etched using the standard Radio Shack. The boards are two sided, signals on the back with the top being ground plane, 1 oz copper. Current carrying traces are plated with Silver Solder. All parts are stock per the article except the input decoupling cap and feedback resistor were upgrades. I used BlackgateN and Rikon respectively. Separate power supplies are used with a common ground at the cap bank. The power supply uses two Avel Lindberg 600VA transformers with 84,000uF of capacitance. Power cables are 8 gauge OFC while all signal wires are silver/teflon. My last mod was to up the bias of the input buffer to 50mA. With the exception of getting Q3 in backwards not once but twice, it worked perfectly. The sound was very nice. Very good sound stage and detail. As expected, the low power caused some problems with my speakers in dynamics and low end but was very enjoyable to listen at low to medium power levels. What a wonderful experience to build and listen too. Thanks to Nelson and everyone else in the DIY forum as I actually know how it works to. Regards Scott Gregory