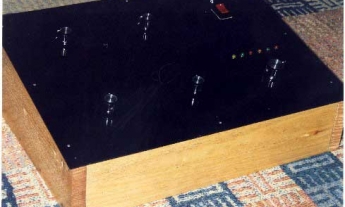 About me
My name is Ian Mackenzie, I live in Melbourne Australia.

Having built the A2 I needed a high quality pre amplifier and decided to make the Bosoz Pre Amplifier for a pure class A signal path . It seemed a logical step to build a matching diy pre amplifier designed by Mr Pass and having read the original article many times I could hardly resist the opportunity to discover the true sonic magic of the Bosoz. All the components were ordered directly as specified from Digikey, except for the output capacitors which are Blackgate 50volt 10uf line coupling capacitors. I made the PCB's direct from the art work in the original article. For some reason I mixed up the artwork and ended up with the copper etching face up on the component side. This actually worked in my favour later on as I was able to easy modify the design as required without removing the boards from the case. I find the photo etching a favourite aspect of my diy projects, you can literally watch your creation materialize before you. In order to make the boards functional I initially mounted them in an old aluminium case in true diy style from an earlier project. The output attenuator was a 6 position Lorlin rotary switch and the input pot as an Allen Bradley dual gang conductive plastic model. I recall switching the preamp on and could not believe how hot the fets ran on the preamp boards and the power supply but this did not seem to trouble the operation of the unit. After some initial voltage readings I connected the Bosoz to the Aleph 2 using an unbalanced input and balanced XLR cable output. The result was rather impressive, I have never heard such a remarkable preamplifier.......a very romantic sound. Later on I decided to re build the preamplifier around the concept of an audio mixer. The idea was for control of the volume level at the listener position and I came up with a sloping desktop box not unlike a small mixing console. This approach avoids the need to constantly adjust the sound level away from the listening zone. The design however was incomplete and I needed an input switching system and some high quality attenuators. I finally found a clever relay driven input selector and used artwork from another diyer on the diymania.net site. Mr Pass was very generous and provided me with some surplus 24 position Electro switches which I have adapted for the input and output attenuators. Not content with the passive current sources I modified the design and used a simple FET current source with a Zener voltage reference to ensure optimum operation with either balanced or unbalanced inputs. The preamplifier now caters for both unbalanced and balanced inputs and outputs. The final step in the design was however another amendment to convert the pre amplifier to the Pass X operation in keeping with the more contemporary X Aleph power amplifier. This was a great project and is the heart of my PassDIY audio system. Thank you Mr. Pass and Karen the Pass diy Diva for assisting with this project. It would never have happened without your support. Ian Mackenzie, .(JavaScript must be enabled to view this email address)