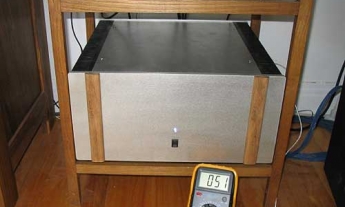 Starting with a 750 VA Plitron 2*37 volts AC and a series of 40 Nichicon 5600 micro F 63 Volts 105 degrees bought from DIYer Peter Daniel. I have built 4 CRC's with 5 * 5600 MicroF + 0.5 Ohms 30watts + 5 * 5600 MicroF added some 100 micro F plus 0.1 micro F, gives 2*40 Volts and the ripple is down to 80 milli volts, some heavy gage copper #12 to link all these. The finals 24 IRF 232 + 24 IRF 9231 already paired came from Norman Show, they are installed 12 in a row on aluminum angles. The heatsinks are from Therma Flo, EH 1126 B long 8" they are assembled by 6 and support the 2 angles receiving the rails of 12 MosFet's ; I thought some support was needed for the source and gate resistors, so I attached 4 boards to the angles. Some 10 mm holes in the lower part of the heatsinks will serve to add more ventilation, flaps will be inserted to redirect the air flux ....more tweaking. The Front End and power supply PCB's came from Audio Express I have have added 4 * 100 micro F on the Front end board for the +-50 volts to avoid oscillations. The 12 DC fan with temperature regulation is installed on the bottom . Added 2 DC 30 Amp's relay's to put the amp in Stanby mode with 2 security's cutting at 70 degrees on the upper part of the heatsinks. Mounted the pot's of the front end on the back of the PCB gives access through the rear panel, and the 2 last source resistors are connected to micro banana plugs ; it's handy for adjusting the bias. I needed power to drive my Martin Logan Aerius i I have such good bass, a rich and airy medium and heights, El Diablo is the answer. Results: Bias 78 milli volts on the .47 ohms sources resistors that's 2 Amp. by channel temperature reaching 52 degrees on the upper part of the heatsinks after 4 hours (fan at 7 volts slow mode). A real delight. Thanks so much to Norman Thagard and Nelson Pass for bringing such great a project. Thanks to all DIYer's from the Pass Labs group. And thanks to my girl friend Danielle for supporting me. Regards. PS: Looking now to a X-BOSOZ and ONO to build... Alain.