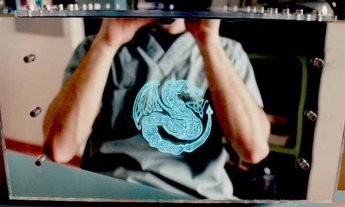 About me
My name is Ben. I am from Hamilton, Canada. Here are some pics of my A75, which I call the Blue Dragon. The chassis is made of mirrored Plexiglas. This greatly increases the WAF (wife acceptance factor) since the amp will always match the colours of its surroundings. I carved a dragon symbol on the front and lit it with an electro luminescent backlighting element.

Unfortunately the inverter which drives this element adds a bit of noise to my output so I later installed a power switch for the backlight. I also added a switch for my fans since they add a bit of noise to the output and my heat sinks don't really get that hot anyways. If I were to do this over again I would layout the components so that the wiring was less spaghetti like. My poor wiring layout has created a sneaky 60Hz goblin that I am still chasing. The little bit of hum is no big deal though since I usually have the volume really really loud

Thank you Pass Labs! Ben Heil Update (months later): I have made some changes to my amplifier to eliminate the noise on my outputs. I re-routed my input wires away from the toroid. I also re-wired all my grounds to the same point which eliminated ground loops. The fans and backlight inverter no longer add noise to my outputs. The sound of this amp is heavenly!