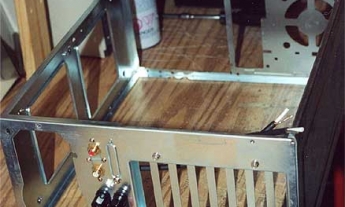 Pass/Thagard A75 Goes Mono Computer Case Amp As Nelson Pass says, the chassis is often the hardest part of an electronics project. This amp cheats by adapting the old to fit a new purpose. The enclosure for this mono version of the Pass/Thagard A75 started life as a ‘mini ’ ATA computer case, but struts it ’s stuff nicely when clad in a quarter inch aluminum plate and given a good polish. The impulse for this amplifier project was to use up some MOSFETS from previous projects, and, as I told my wife, by recycling some computer parts, build a less expensive amplifier. It will eventually drive a sub-woofer in the next iteration of my sound system, with one of my stereo A75 amps handling the other two channels. The power supply for the output stage starts with a 625 VA toroidal transformer from Plitron. It connects to a pair of 30 amp full bridge rectifiers and a 120,000 uf filter network. This provides an unregulated ± 43 volts for the output MOSFETS. I mounted the power supply transformer horizontally to better fit the width of the enclosure. The long centre bolt is isolated using fibre washers to avoid a shorted-turn situation. I coated the part of the transformer that sticks out with a thick layer of Krylon spray Plastic, it seems durable enough. I salvaged some power supply parts from the original computer, using the sub-enclosure to house the regulated ±50 volt power supply needed by the A75 ’s front end. Other recycled bits include the capacitors in the voltage doubler circuit, power plugs and the cooling fan —about $20 worth of stuff; it won ’t save the planet, but it makes me feel virtuous. Thrift also pleases my wife. I added a small +12 V regulated power supply for the front panel LED power meter, (a kit from Velleman), and the cooling fan. It is a tight squeeze to get all the power supply parts stuffed into the enclosure. The driver stage of the amplifier section uses one half of a board etched for an earlier stereo version of the A75 amplifier. Both channels on the board have been assembled and tested so there is a redundant driver stage should one ever be needed. The driver PCB mounts right side up at the top of the amplifier case so it is easy to adjust the offset and bias. The top is held on with six acorn nuts and comes off easily. I replaced the original case cover with ¼ inch aluminum plate and dressed up the outside with cooling ‘flutes ’ made from heavy gauge square tubing. Between these flutes, I mounted the output stage MOSFETS. Although 38 output devices are mounted, only 30 are actually wired into the circuit. The rest are there only to complete the pattern and to sit waiting for their turn should any of the others fail. Gate and source resistors are mounted on strips of PCB. I fitted this amp with a thermal cutoff switch (centre of the side cover) and wired it in series with the on-off switch. Air is drawn into the enclosure through a number of holes around the perimeter of the bottom and beneath the filter capacitors. Each of the square tubes on the outside is also vented to the inside and the air flow from these creates, I assume, some turbulence inside the enclosure. The cooling fan at the top rear draws warm air from the inside of the enclosure. It cools well and I am able to run 175 mA of bias current through the output MOSFETS. The case remains below 55 deg even when the amplifier is working hard. The back of the amplifier has connectors for power, auxilliary power out, two sets of speakers, a balanced XLR connector, an unbalanced RCA connector and a switch for balanced and unbalanced input. All fit nicely into holes which were punched for the keyboard and communications ports of the old 486 computer. The performance of this amplifier is great. I burned it in with some fine Israeli and Goa trance over a long, long weekend. Now that the aluminum has aged and mellowed, I get a deep bass and clear highs. Truly impressive range and depth; a super addition to the ‘family.’ Thanks to Norm Thagard and Nelson Pass for making the A75 design available and continuing to write all that informative stuff in Audio Xpress. I read it all and understand more all the time. Thanks also to all the enthusiastic hobbyists out there who have written to share their special passion for the A75 design and for large inefficient A class amplifiers in general. Julian Evetts Calgary,Alberta